No Bain No Gain

I’ve got a long list of the best places on earth to take a photo, and I’m here in Mandalay to tick one of them off the list: U-Bain Bridge.

Tell the taxi driver what I want, and he knows just where to go. Apparently U-Bain is not much of secret. In fact, an entire village has sprung up around it’s western side, expressly for fleecing tourists. I hadn’t anticipated having to share the bridge with several hundred people, but it’s high season, so there’s nothing I can do about it.

Turns out you need to rent a boat to get the best view, also turns out there’s a long line to get one. Hmm. The sun is already pretty low and I’m thinking I may have to come back tomorrow. But might as well try. I get in line. There’s about 20 people in front of me, but luckily about 50 boats still waiting for passengers.

Get on board and my guy starts rowing, I’ll call him Sahib. There’s a bunch of construction along the first part of the bridge, but we arrive at the other side with plenty of sun to spare. Sahib nestles us in at the end of a long line of other boats. These guys have got the system down to get everyone an unobstructed view, and the view is pretty good.

But pretty good is not cutting it. Ideal scenario would include a couple of robed monks strolling across the bridge, or maybe a lady on a bicycle. Current reality is a few hundred tourists with selfie sticks. Sit there and take a few shots. Slap on an orange filter for that hot tropical look, and… it’s alright, but…

Further down, the crowd thins out a bit, and I see a boat breaking formation to get a closer look. I signal to Sahib, “Thataway.”

He looks confused. The sun hasn’t gone down yet, and everyone always stays until after sunset. He motions towards the bridge, as if to tell me to take a photo. I’m not everyone Sahib, get paddling. We intercept the stray boat, and I like the shape it makes with the bridge as a background. Much better. Click.

Further back toward shore, I look at the construction zone and get an idea. Part of the bridge is obstructed with an ugly plastic sheet, and that’s bad. But, when the setting sun shines through that plastic, it’s going to light up nicely. “Sahib, that-away…” 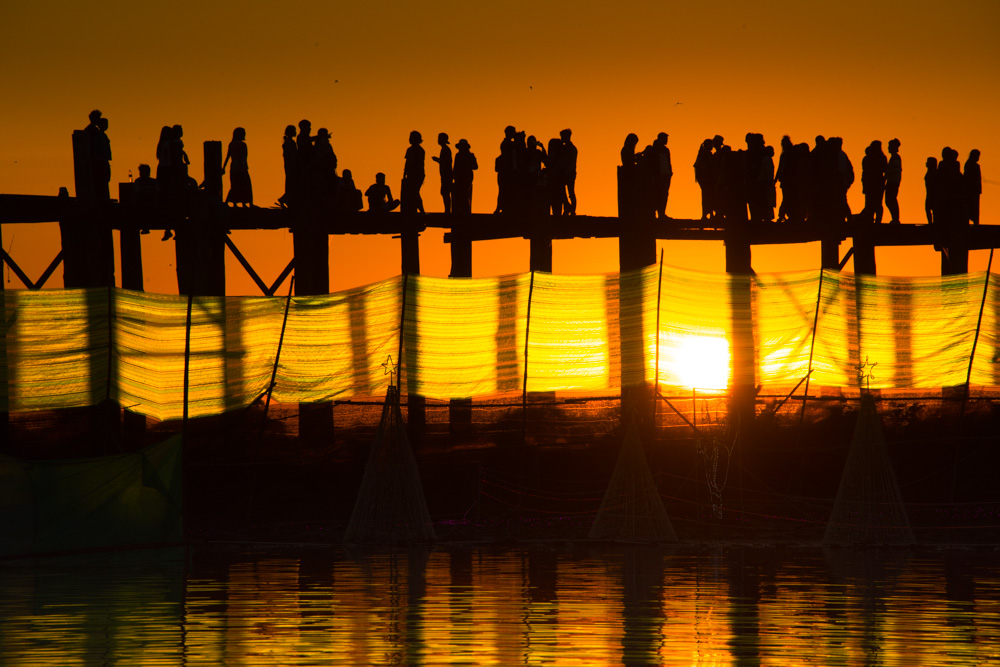