When the Cows Go Home 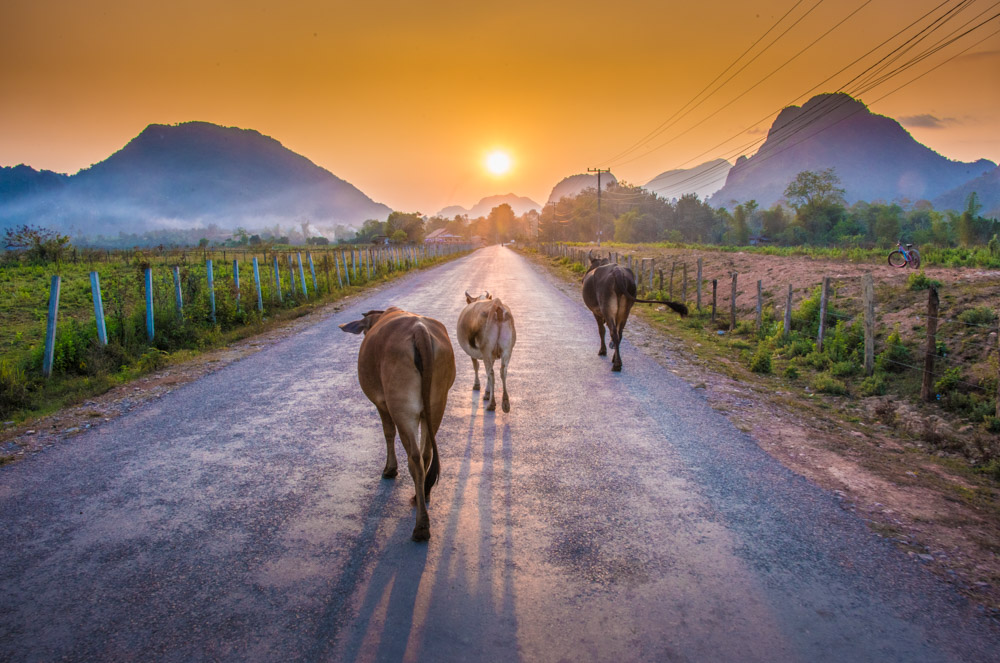 Driving around on a scooter west of Vang Vieng, trying to pick out a spot for a sunset shot. It appears to me that the sun will set dead center on this country road, and I like the smoke from whatever the farmers are burning back there, so I park and hang out.

What I really need though is a focal point. The scene makes a great background, but I need some “thing” in front. If I’d brought my tripod I could pose, or if Tarzan Girl was around I could stick her in there, but negative on both accounts.

A kid drives by on a scooter. I take a shot of him as a test. Not great. Some other tourists ride by. They see me standing there with my camera, get off their bikes, and try to figure out what I’m taking a picture of so they can take a picture of it too. They give up and get back on their bikes.

The sun is getting pretty darn low now, and it looks like I might have to settle for just the road. But I hear bells clanging, and from the field behind me a kid with a stick is prodding a herd of cows onto the road. Showtime!

I let three go by, then walk along behind them, with a few dozen more cows behind me. Mooo! I’m part of the herd, but herding as well, as I try to shuffle the three in front of me into some sort of pleasing composition.

I’ve got the shutter set to automatic, and just keep my finger down, clicking pic after pic after pic. Finally a truck comes along the other way, and the herd and I are shuffled to one side. The cows head home, and so do I.